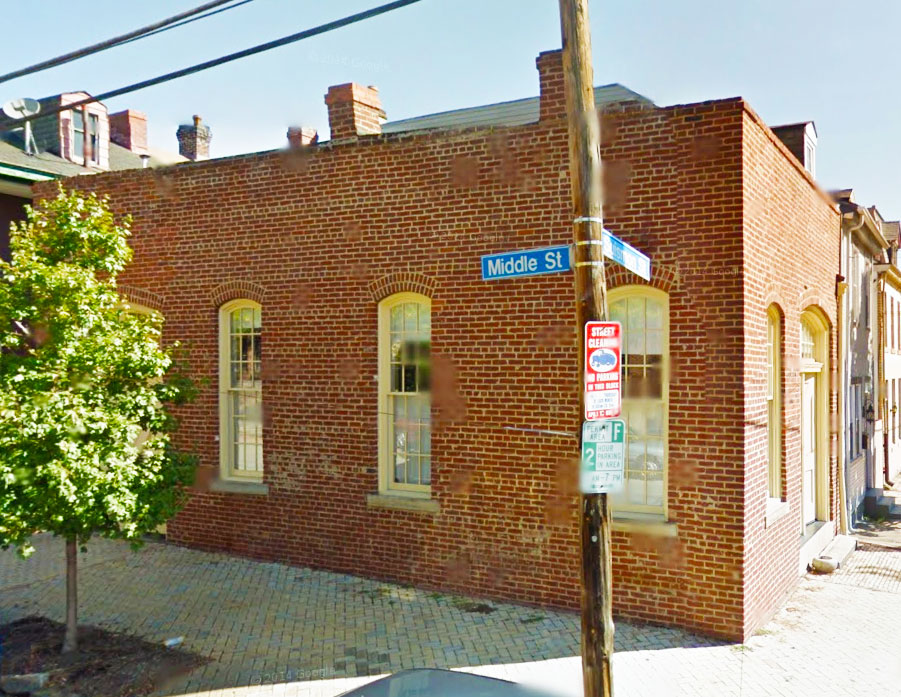 Located in a National Historic District, the 900 square foot space originally housed a 19th century, pre-automobile necessity – a blacksmith’s horseshoeing shop. From the 1920s/30s through the 1990s, the property operated as a chocolate confectioner.  The large carriage doors intended for horses were bricked up, the windows turned into glass block, and the building went into decline. Jen and Bob acquired the building in 2002.

To comply with National Park Service historic tax credit stipulations, the building’s restoration had to adhere to strict historic preservation standards regarding building materials and processes.  Bob Baumbach turned to Pittsburgh History and Landmarks Foundation’s archive to research the building’s original appearance and history.  The research paid off, as a Clyde Hare phootgraph showed the windows bricked up by the 1950s, while the original windows revealed themselves in a 1870s photograph.  A document from the late 1800s listed horseshoes purchased from Eberhardt and Ober (currently Penn Brewery), for their beer delivery horses.  And, old platte maps detailed a bustling Allegheny City commercial area, including this blacksmith shop.

Based on this information, artisan craftsmen led the meticulous masonry restoration and the replication of door and window profiles in solid wood.  Stone sills were salvaged from a nearby demolition. The HVAC system was roof-mounted behind a parapet wall to conceal modern conventions from the Victorian façade.  And Baumbach, with a decade of experience in building restoration and preservation, lent expertise.

During restoration, an octogenarian named John, who visited the blacksmiths as a child, paid a visit to the shop.  After reminiscing about turning the smith’s bent nails into toys, he claimed, “This is just like how I remember it.”

Additionally, Baumbach researched the original owner, John Schmidtdeil, and found his descendents residing in Bellevue. Contact was made, and family members, who had photographs of the building but did not know its exact location, have since visited the building.

An article by Deutschtown resident Bette McDevitt in Western Pennsylvania History magazine promoted additional interest in the building’s past and its new life as a studio, and the Pittsburgh Post-Gazette ran this feature about the community celebration to open the newly restored building http://www.post-gazette.com/pg/06268/724775-53.stm.  900 Middle Street won a 2007 Cool Space Locator award in the category of Community.